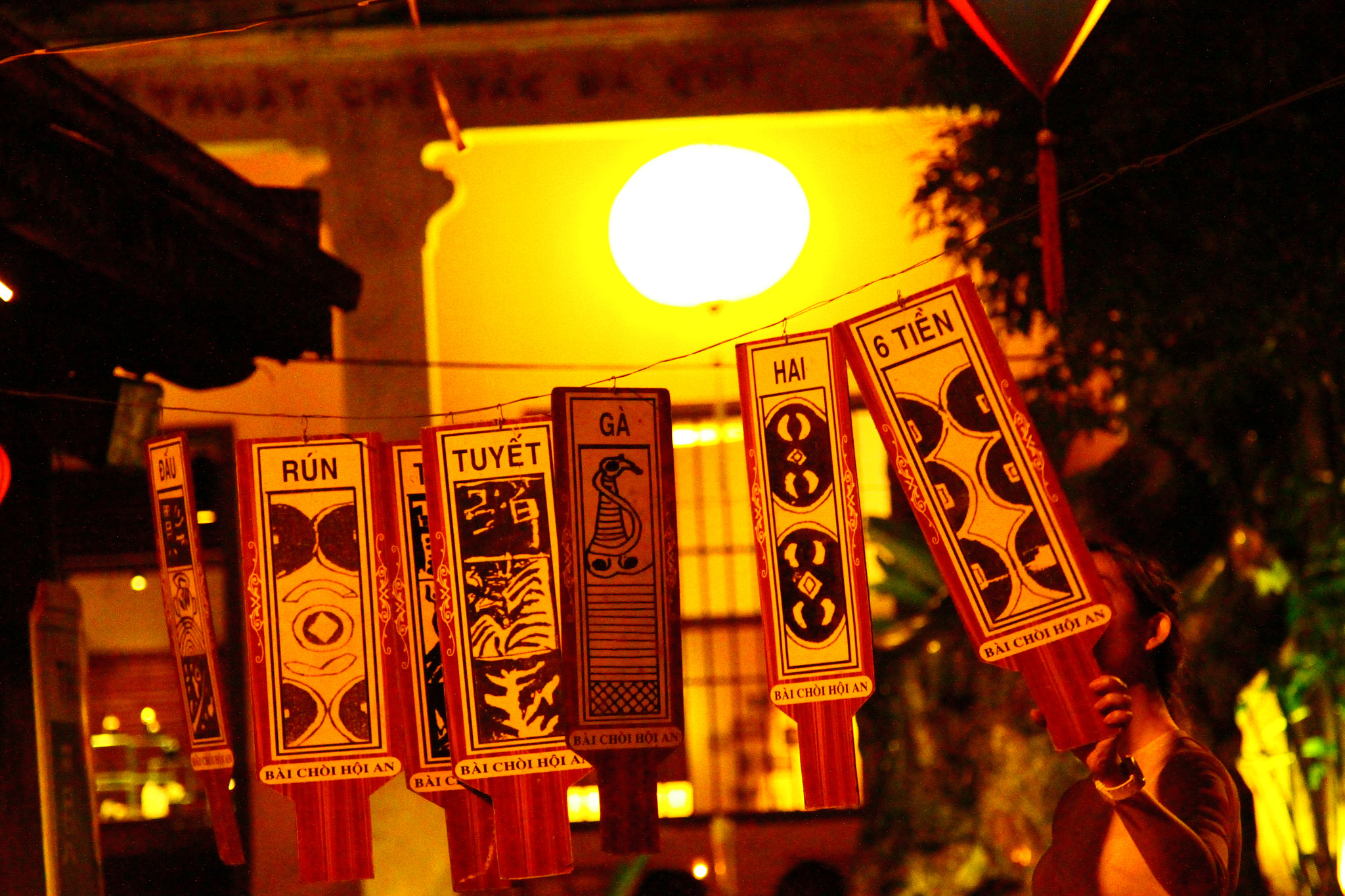 How do you know you are lucky when coming to Hoi An?
detailed information

The first time I played “bai choi” in Hoi An was when I had just finished the National Excellent Student Competition Literature section. The results of the contest would influence quite a lot on our future, so despite of walking on the beautiful streets in Hoi An, I and my friends were very anxious.

In the quiet space of the night, we suddenly ran across a glamourous and colorful area lightened by countless lanterns, fused with mild, eager melody along with throbbing drumbeat. People were playing “bai choi” there!

“Bai choi” is a popular game of the residents in the central of Vietnam during the new year. 27 pairs of cards (54 cards) are sticked on bars made of bamboo. The set of bamboo bars is split in half: half of it is put in a bamboo tube which will be kept by the caller, the rest is given to the players.

There are 9 participants (who are called houses) in this game and each house will be received 3 cards at random. The caller will randomly take cards one by one from the tube and call their name out loud. The first player who has three cards called out loud will be the winner.

The most interesting thing is that instead of calling the cards normally, the caller performs it attractively by singing folk songs talking about the hometown, love, bad habits.... For example, when the card whose name is "Sleeping in" is withdrawn, the caller will sing:

"Being a flirtatious girl Only wakes up at mid-day Clothes are tattered And patched up with straw here and there, “Sleeping in” it is"

or "She insisted on saying she was not with him Then whose else footprints are near the river " It is the card "Four Legs".

Actually, the chance of winning “bai choi” is very low because it is not easy to be the first person to hold 3 cards which match the cards picked up by the caller. Therefore, if you win you would be considered very lucky.

It is surprised that, at that night, I was the only one winning the game at the first try. As a good sign, my teacher said to me certainly: "I believe that you are predestined to win the prize at the National Excellent Student Competition”. And the final results appeared to meet all expectation.

Every time I see the red lantern in front of my house - the prize for the winner of “bai choi”, it reminds me of the dim light, together with passionate, emotional verses sang along Hoai river at that miraculous night.

If you have chance to go to Hoi An, try “bai choi” which takes place every night along Hoai river!